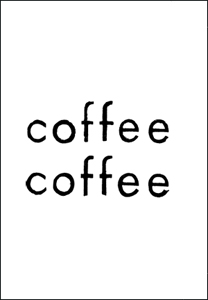 This is the second edition of the reprint. The first edition, now out of print, was a fascimile of the staple bound original. The second edition is perfect bound and of slightly smaller dimensions.

Infamous artist book by one of the 1960s most controversial poets. Coffee Coffee was originally published as a mimeographed edition by Vito Acconci and Bernadette Mayer on their 0 To 9 press in 1967. True to Saroyan’s minimalist approach of the time, Coffee Coffee’s pages contain one word (sometimes 2 and once or twice, 3), each pulling you to the next (revolving door-like). Selections from Coffee Coffee appear in the recent anthology Complete Minimal Poems (Ugly Duckling Presse) edited by Primary Information co-founder James Hoff; however, this is the first time that this work has appeared in its complete and initial form since 1967.