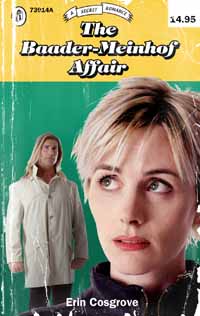 Mara was a loner at the very exclusive Norden College until she meets the fascinating Holden Rife who introduces her to a secretive off-campus world of Baader-Meinhof aficionados.

But how far will Holden’s activist group go in playing out their love affair with these uppermiddle-class German terrorist/revolutionaries?

Mara discovers that Holden’s Baader-Meinhof group is more dangerous than she ever imagined. The devotees blur the line between reality and make-believe in the ‘Baader-Meinhof Games,’ while Mara struggles not to lose herself and her heart to the impossible and impossibly handsome Holden Rife.