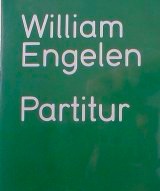 « Partitur Stadtgarten » should be considered a commissioned work. The NAK asked William Engelen to create a project whose theme should be the surrounding environment. In Aachen, the Stadtgarten is characteristic of contemporary urban parks. (…) Engelen’s project for the NAK is divided into four presentational elements. The composition, consisting of seven musical pieces, was performed at seven sites in the Stadtgarten. Altogether sixteen musicians from nine nations took part in the concert production. The international aspect had to do with the quality of the musicians, but at the same time represents a feature of life in the park, too. A studio recording of all seven of the concert’s themes, the score and materials became part of a room installation that also contained drawings on the wall and texts by Engelen. The installation represents the work in the Stadtgarten in all of its complexity. Here, the real space is translated into a completely abstract version, occasionally mediated by plan-like structures, numbered series and a few video recordings.